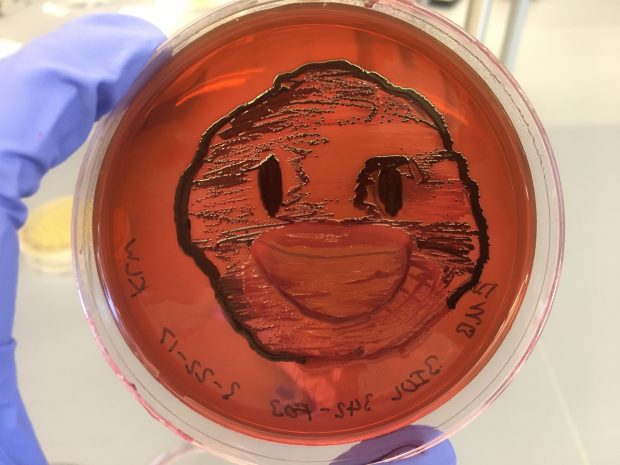 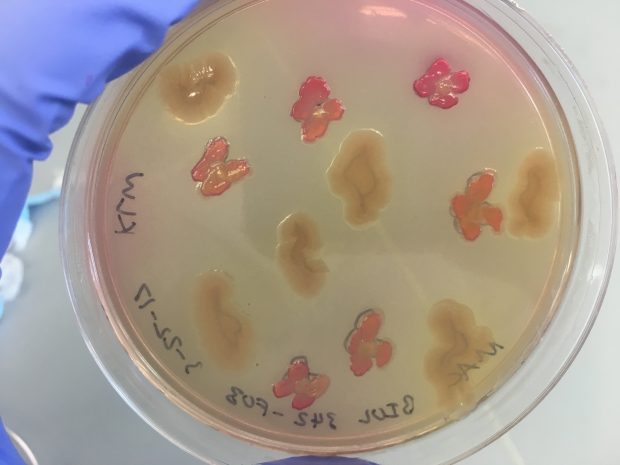 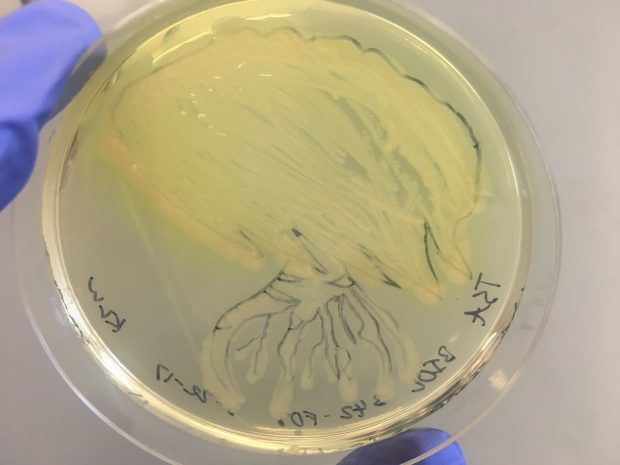 My artistic intent was to use the colors of microbes available to make images of common things we see in everyday life which all have a tie to microbes. Microbes play a significant role, both out in nature as well as within other organisms. Two of my plates had a nature theme (the tree was meant to be a weeping birch and the other a mixture of flowers and leaves) while the other was meant to be an emoticon/person. While the Tryptic Soy Agar (TSA) and MacConkey (MAC) Agar paintings turned out as I meant them to, I was envisioning different colors for the Eosin Methylene Blue (EMB) plate. However, I think this difference in color expectation and result is due to the fact that I was likely envisioning how the colors of the three microbes would have turned out using a TSA plate.

On the TSA plate, the bacterium grow and display their natural coloring, as evidenced by the green/yellow coloration of the P. aeruginosa composing the leaves of the tree and the white coloration of the S. enteritis used for the bark.

On the MAC plate, I used the fact that this agar is differential according to a bacterium’s ability to ferment lactose. To form yellow leaves and flower centers, I used P. mirabilis, which does not ferment lactose and thus results in yellow or colorless colonies. For the flower petals, I used C. freundii, a bacterium which ferments lactose and therefore turns the colonies and agar pink in the areas it is grown.

On the EMB plate, I used three different Gram-negative bacteria (C. freundii, N. flava, and P. Mirabilis) to form a smiling emoticon. Even though I made my choices of bacterium based on the colors they present with on TSA, I think this painting still turned out acceptable as it seems I picked two bacteria which ferment lactose to different degrees as well as one that does not ferment lactose. This is evidenced in the different colors the three bacteria present with on this agar type (black and red for the fermenters and pink for the non-fermenter).