Isolation and characterization of Micrococcus luteus from Modern Technology

The abundance of microorganisms in our world cannot be overstated. They are everywhere, from the sulfur vents at the bottom of the oceans, to our skin, and to the inanimate objects we interact with on a daily basis. The variety of environments in which microbes survive and thrive demonstrates just how diverse they are in their metabolic capabilities. Microbial diversity can be beneficial for our environment and our health, although many microbes can also be pathogenic and have detrimental effects.

Our hands are especially effective at picking up and transmitting bacteria (Lax, 2017). What does this mean for bacterial transmission in an era of increased hands-on technology? Research is beginning to find that cell phones in particular are efficient vectors for transmitting pathogenic bacteria, as well as mechanisms for increasing antibiotic resistance (Loyola et al., 2016).

With this in mind, the main goal of this experiment was to isolate and determine one of the several types of microbes found on cell phones. Gram-staining, physiological tests, and genome sequencing were used to identify and characterize the isolate. Antibiotic susceptibility and resistance was also tested. The results from these tests determined the microbe isolated from the cell phone surface was Micrococcus luteus. M. luteus is typically a harmless bacteria commonly found on human skin (Brock et al., 2015).

The sample was obtained using a sterile swab moistened with sterile water and swabbing the surface of a cellular device. The swab was wiped against a cell phone case and streaked on a tryptic soy agar (TSA) plate. The plate was sealed and left for several days at room temperature, with an additional day in an incubator at 37 °C before colonies formed. A single colony was selected to isolate and the streak plate method was used (Leigh, 2017a). Approximately three streak plates were done to obtain a pure isolate.

Once the colony was pure, observations regarding size, shape, morphology, and color were conducted, as well as a series of physiological tests. First, Gram staining was done to determine whether the isolated bacterial colony was Gram-positive or Gram-negative. Following this, a fluid thiogylcollate test was done to determine oxygen class, as well as oxidase and catalase tests, to determine if the strain had cytochrome c oxidase and the enzyme catalase, respectively. An API 20E test strip, which contains 21 miniature physiological tests including the nitrate reduction test, was conducted to determine a variety of physiological and metabolic properties (Leigh, 2017c). Additionally, antibiotic susceptibility was tested using the disk diffusion test (Leigh, 2017d).

In order to extract DNA from the bacteria, a fresh sample of the isolate was grown in liquid tryptic soy broth (TSB) culture and its genomic DNA was extracted using the PowerSoil DNA Isolation Kit (Leigh, 2017b). Extracted DNA was sent to the UAF Core Lab for genome sequencing using Illumina MiSeq technology (Leigh, 2017b). Sequence analysis was done using the BaseSpace and BLAST programs.

Once bacterium was isolated, it was noted that the pure culture was yellow and relatively flat. The isolate was determined to be Gram-positive, round (cocci) and clustered in groups of varying numbers, including tetrads. The fluid thioglycollate test was consistent with that of a facultative anaerobe, as there was growth throughout the tube, but slightly more so at the surface. The oxidase and catalase tests were both positive, meaning the isolate has cytochrome c oxidase and catalase enzymes, which indicate the presence of an aerobic electron transport chain and the ability to convert hydrogen peroxide into oxygen and water, respectively (Table 1). The API 20E test strip revealed the microbe’s ability to completely reduce nitrate, as well as other physiological traits (Table 1). This microbe also tested positive for arginine dihydrolase, which allows it to use the amino acid arginine as a carbon and energy source, in addition to testing positive for gelatinase, an enzyme that allows the organism to break down gelatin, a collagen derivative (Table 1). Those were the only positive test results. Given the microbe is Gram-positive, it is not surprising to see few positive reactions because the API 20e test strip is designed for Gram-negative Enterobacteriaceaea. A follow up API Staph strip was done, however most tests were negative, resulting in a 99.6% match with Micrococcus luteus.

Once sequencing was complete, it was discovered that of the 3,340 reads analyzed by BaseSpace, 2,666 were classified; of the classified reads, approximately 97.80% were identified as Micrococcus luteus (Fig. 2). When run through Basic Local Alignment Search Tool, or BLAST, the genome was determined to belong to Micrococcus luteus as well.

In analyzing antibiotic susceptibility, this microbe was found to be highly susceptible to a variety of broad-spectrum antibiotics, particularly Cefazolin, Tetracycline, Gentamycin, Amikacin, and Cefoperazone (Table 2). Cefazolin and Cefoperazone both interfere with cell wall synthesis by binding to penicillin binding proteins (PBP’s), while Tetracycline, Amikacin, and Gentamycin both interfere with translation by binding to the bacterial 30S subunit. 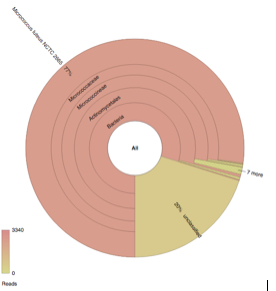 Figure 1. The Krona from BaseSpace is shaded based on the number of reads. Although BaseSpace could not classify 20% of the reads, BLAST was able to identify most of these unknowns belonging to Micrococcus luteus.

Table 2. Common and broad-spectrum antibiotics proved to be effective against this bacterial isolate.

The majority of morphological observations and physiological tests were consistent with Micrococcus luteus, except the thioglycollate test, which showed the isolate as a facultative anaerobe. Micrococcus luteus is actually an obligate aerobe though (Kooken et al., 2012). This conflicting result could be explained by poor technique, perhaps allowing oxygen into the anoxic zone of the tube. However, the yellow pigment, smooth morphology, tetrads and varying clusters, Gram-Positive, oxidase and catalase positive results that were observed throughout this study align well with established research (Kloos, 1974). Many Micrococci species, as well as Staphylococcus and Kocuria species share many of these traits though. One distinguishing physiological test is the glucose test, as many species within these genera are able to utilize glucose (Kooken, 2012). M. luteus is unable to use glucose as a sole carbon source, which was observed in the results of the API 20E test (Table 1). Compared to other Actinobacteria, M. luteus has one of the smallest genomes at approximately 2,501,097 base pairs and appears to lack the genes that would allow it to metabolize glucose (Young, 2010).

As noted previously, it had been difficult for scientists to distinguish Micrococcus species from those of Staphylococcus with only morphological observations (Kooken, 2012). While Micrococcus species are not usually considered pathogenic, it can be an opportunistic pathogen, albeit rarely, in the cases of immunocompromised patients such as those with HIV or acute lymphoblastic leukemia (Smith, 1999; Payne, 2003). It is for this reason physiological tests such as the API Staph test strips and genomic tests are important in the differentiation between the two bacteria, especially because as useful as the glucose test is, it does not always provide accurate results. Additionally, when considering that Staphylococcus aureus can be a potentially dangerous pathogen and has a much higher rate of antibiotic resistance, it is important to be sure that a strain is or is not M. luteus, which is generally less harmful, is shown to be susceptible to a broad range of antibiotics (Table 2), and is known throughout the scientific community as being a highly sensitive bacteria (Young, 2010).

While little DNA was successfully extracted from the sample, I can confidently identify my isolate as Micrococcus luteus, as the DNA sequences that could be analyzed had anywhere from 97% to 100% query cover with known M. luteus sequences. Closely related species, such as those of the genus Kocuria, which used to be part of the Micrococcus genus, were eliminated with the glucose test, as previously mentioned. As M. luteus is most commonly found on human skin and makes up a portion of the normal skin microflora, it makes sense that it can be isolated from a cell phone, since it comes into contact with human skin on a daily basis (Brock et al., 2015).