This world would not be the same without microorganisms which play a prominent role in it. Bacteria are extremely diverse, abundant, and have the ability to occupy almost each niche of the world’s habitat, choosing it according to each bacteria’s nutritional and energy needs. The human oral cavity is not the exception.

With the above background, the oral microbiota was chosen for the following experiment. The oral cavity has all possible favorable conditions for microorganisms such as temperature, pH, humidity, nutrients, and oxygen if needed. In the oral cavity, bacteria can reside on the mucous of the buccal vestibule, at the tongue dorsum, periodontal pockets, tonsils, and teeth surface. The most predominant genera for oral microbiota include but not limited to Streptococcus, Veilonella, Lactobacillus, Actinomyces, Haemophilus, and Neisseria (Belstrom et al., 2016; Lif Holgerson et al., 2015).

The objectives for this study were to isolate, characterize, and identify a bacterium from the oral cavity. The sample was obtained by placing a cotton swab in the oral cavity of a human. The pure culture was isolated through a series of streaking methods. To obtain taxonomic characteristic for a microbial isolate, a series of physiological and genetic tests were conducted followed by series of antibiotic resistance tests. It was determined that the microbial isolate was the bacterium Streptococcus salivarius.

To start the experiment, I obtained two samples: one from the oral cavity of a human and the other one from the ear of my cat Tima. I moistened a sterile cotton swab with sterile water provided for each sample collection, swiped inside the cat’s ear and inside the oral cavity of a human, and inoculated two samples to a tryptic soy agar (TSA) plate and a Sabouraud’s agar (SA) plate with it. I put a Parafilm strip around each media plate and kept them at room temperature. After forty-eight hours, all media plates were placed in my boiler room with a bit higher temperature to encourage bacterial growth. I allowed cultures to grow and form colonies.

Once bacterial colonization visibly occurred, I chose a bacterial colony, reinoculated it to a new TSA plate using a streak plate method, and kept the media plate in the incubator at 370C to grow. I repeated the streaking plate method and grew the bacterial culture two more times with an interval of forty-eight to seventy-two hours to isolate a truly pure culture. I took notes on the isolate colonies color, size, shape, elevation, and margins.

Next, I determined if my bacterial isolate was Gram-positive or Gram-negative and used the Gram staining techniques for this process (Lab 4 protocol). Also, I inoculated a tryptic soy broth (TSB) with my bacterial isolate and a slant, for genomic DNA extraction and storage in the fridge, respectively.

To characterize physiological traits of my bacterial isolate and determine its possible identification, I used a series tests including:  fluid thioglycolate, oxidase, catalase, and an API20 E test kit designed for enteric, Gram-negative bacteria. (Lab 6 protocol).

The genomic DNA extraction was performed using the PowerSoil DNA isolation protocol (Lab 5 protocol). I harvested cells from my liquid culture of bacterial isolate in TSB and placed them in a PowerBead tube; then, I lysed all bacterial cells with sodium dodecyl sulfate (SDS), centrifuged the mixture at 10,000 on the microfuge and obtained a supernatant. Then, the genomic DNA was purified from proteins, inhibitors, and enzymes by bounding to a “spin filter’ and washed. Finally, I eluted the clean DNA and it was stored at -200C. The genome of my DNA sample was sequenced by the UAF Arctic Biology DNA Core Lab technician via an Illumina MiSeq.

Using the cloud-based software BaseSpace and the applications provided: SPAdes Genome Assembler, Prokka Genome Annotation, and Kraken Metagenomics, I was able to assemble all DNA sequences obtained from Illumina MiSeq sequencing into a bacterial genome, annotate the genes and determine several functional genes, and give a taxonomic assignment to my bacterial isolate, respectively.

And, the bacterial isolate’s susceptibility and resistance to a variety of antibiotics were both tested following the protocol for the Lab 9.

After inoculating complex TSA and selective SA media with a sample form oral cavity, the bacterial growth occurred in about seventy-two hours at 370C on the TSA plate but not on a SA plate. The sample from cat’s ear did not appear to grow on any of two media. From oral cavity, pure bacterial culture for the term project was obtained within approximately fourteen days; four TSA media were used for this purpose. This bacterial culture grew very slow. After growth on TSA, the microorganism formed glossy, white (almost translucent) colonies. Bacterial colonies were 0.8-1.0 mm in diameter, had a round shape, smooth edges, and slightly elevated above the media (Photograph 1).

The Gram staining technique with subsequent sample microscopy revealed that the bacterial isolate was Gram-positive spherical cocci. The bacterial cells were mostly dissociated, some cells arranged in small clusters, and other bacterial cells occurred in short chains. 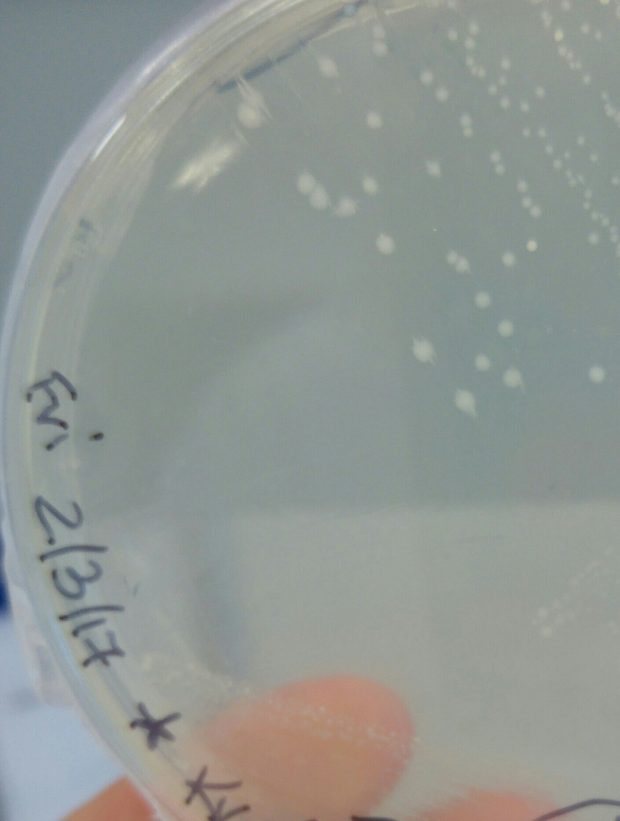 The bacterial pure culture appeared to be an aerotolerant anaerobe as it grew equally well throughout the fluid thioglycollate test tube (Photograph 2). Oxidase, catalase, and API 20E test results were all negative. 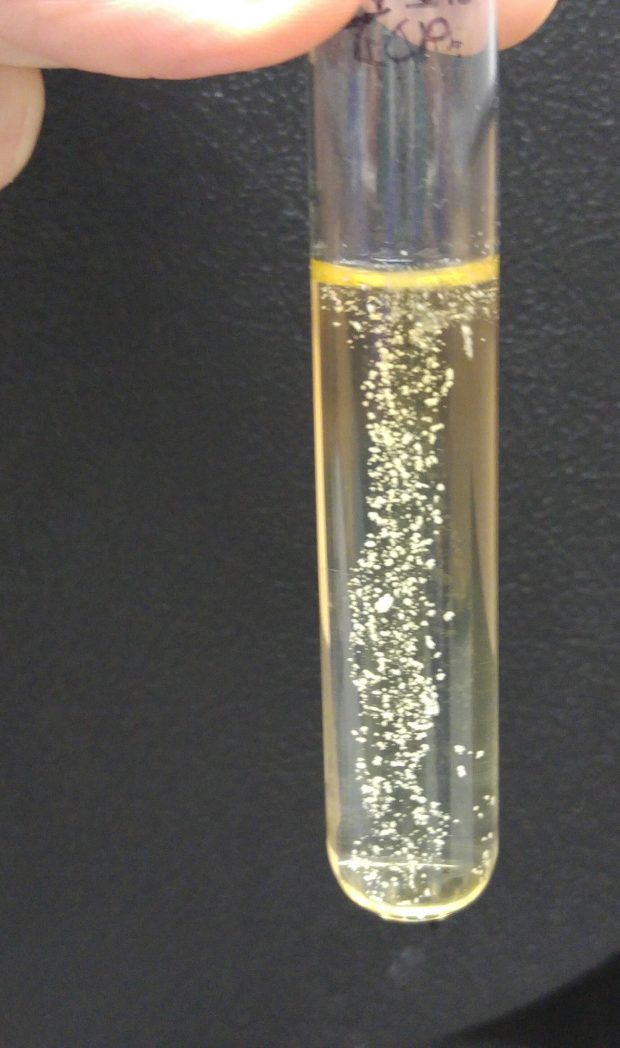 The identification of the bacterial isolate was completed via genomic DNA extraction, followed by genomic sequencing, assembling, and annotation. One hundred and eighty-three contigs were assembled, and about two thousand coding regions were found. S. salivarius species name was assigned to my bacterial isolate with the confidence of 97.06% on the species level (Photograph 3). 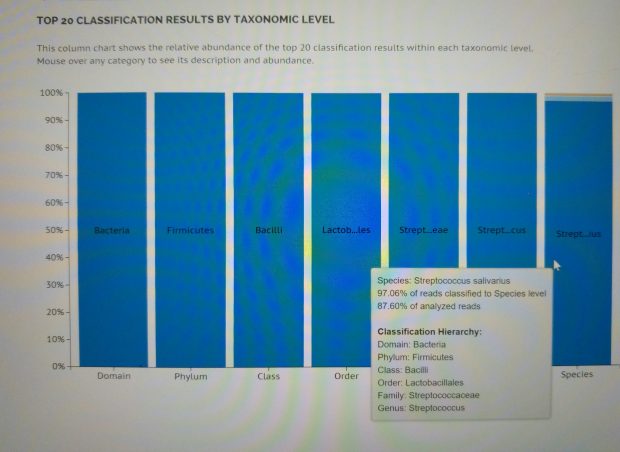 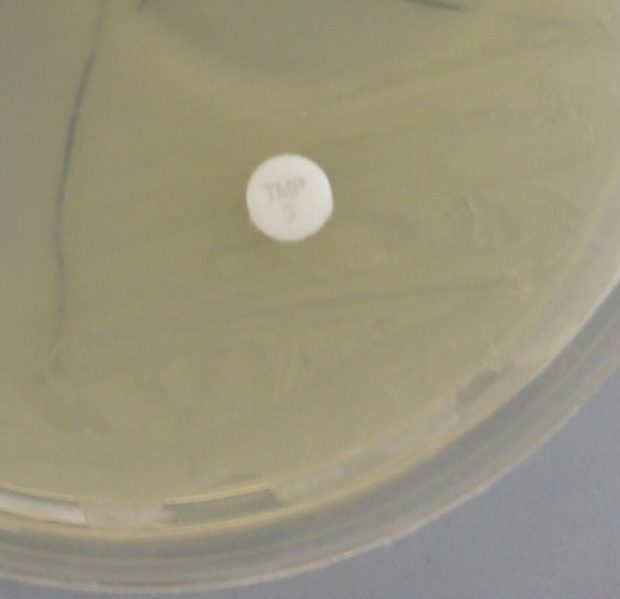 Photograph 4 Streptococcus salivarius appeared to be resistant to Trimethoprim

Due to difficulties in obtaining results from the API 20E test, the genotypic test was primarily used in the identification of the bacterial isolate for the term project. The DNA sequence was run through the cloud-based software BaseSpace and received the taxonomic assignment of Streptococcus salivarius species in 97.06% reads. The salivarius group of commensal organisms contains three genetically similar species, S. salivarius, S. vestibularis, and S. thermophilus, which are predominant species associated with oral health (Belstrom et al, 2016; Delorme et al., 2014).

The genotypic test results explained the difficulties with the API 20E physiological test. S. salivarius is Gram-positive and the test named above, was created for enteric Gram-negative bacteria, so the growth of Gram-positive bacteria would not occur. If I could run any additional physiological tests, I would use an API Strep test kit to elucidate specific metabolic traits exhibited by my isolate.

“Virtually all’ Streptococcus strains are facultative anaerobes, and some may require additional CO2 for growth; they are also catalase- and oxidase-negative (Boone, 2001-2012). Bacterial strains belonging to the S. salivarius species though, can be grown on suitable media in the presence of oxygen at temperatures up to 45oC (Boone, 2001-2012). This information explained the very slow growth of the bacterial isolate on TSA and in room temperature. Bacterial culture growth was somewhat increased when in the incubator, but was enhanced further, when grown in liquid media such as in the TSB. S. salivarius is tolerant to oxygen but preference for hypoxic conditions explained the results observed in this study for the liquid thioglycollate test.

The bacterial isolate was found to be susceptible and intermediate to most antibiotics tested in the Lab. However, the absence of an inhibition zone around Trimethoprim suggests that the bacterial isolate was resistant to this antibiotic. In their study, Barbour and Philip (2014) tested the S. salivarius isolate and found the strain to be resistant to Gentamicin (Barbour & Philip, 2014). In general, this bacterial strain of S. salivarius was sensitive to antibiotics that controlled upper respiratory tract infections (Barbour & Philip, 2014).

In conclusion, this term project was successful and revealed the presence of S. salivarius strains from the human oral cavity. Genome sequencing was integral in obtaining the taxonomic ID and phenotypic tests were only partially successful as the API 20E test strip was not ideal for use with this microbe, and certain environmental conditions such as increased amount of CO2 and temperature (45oC) were unavailable. There is still not enough data on lantibiotic-producing strains of S. salivarius. Further research in this direction might highlight some aspects in the maintaining of human mouths at healthy levels.