In veterinary clinics or hospitals, it is highly important to maintain as clean an environment as possible for the sake of their patients’ health. Failure to do so carries the possibility of inadvertently transferring bacterial or viral pathogens from one patient to the next, which could result in a healthy patient becoming sick simply from having visited the clinic. This is known as a nosocomial infection (Stull and Weese). If a patient is hospitalized and acquires a nosocomial infection, this could lead to its hospital stay being prolonged (Harper et al.). Microbes known to cause nosocomial infections have been isolated from samples taken from various surfaces around veterinary clinics, including medical equipment used on patients, as well as from air samples from the various rooms of an animal hospital (Harper et al.). This means that airborne bacteria could potentially land on and colonize surfaces of medical equipment even after they have been thoroughly cleaned.

In the study of airborne sampling, the most commonly isolated bacteria belonged to the genus Micrococcus (Harper et al.). Micrococcus species commonly grow on Mammalian skin as a commensal bacteria, and are rarely ever pathogenic. There have been rare cases where patients developed infections from Micrococcus bacteria becoming an opportunistic pathogen, but this has only occurred in patients that were immunocompromised (Hanafy et al., Public Health England).

The purpose of this study was to attempt to determine if any pathogenic bacteria were taking up residence on the surfaces of the medical equipment at a local emergency veterinary clinic. Speaking from personal experience, one potential source of contact transfer of microbes is a veterinarian’s or technician’s stethoscope. Though it is used on every patient walking through the doors of the clinic, the cleaning of this piece of medical equipment can be easily overlooked. Many veterinary staff will wear their stethoscope around their neck in order to keep it close at hand and may not get a chance to, or may even forget to, disinfect it in between patients.

I hypothesized that I would find species of bacteria that typically lived either on Mammalian skin and hair, or in canine or feline mouths. I suspected that I might find mouth bacteria because dogs and cats lick their fur to groom themselves. From this hypothesis I predicted that I would isolate a bacterium that could at least tolerate oxygen and would therefore be an aerobe or an aerotolerant anaerobe.

The diaphragm of a frequently used stethoscope at a local veterinary clinic was swabbed with a sterile cotton swab that had been wetted with sterile water. The swab was then used to inoculate a Tryptic Soy Agar (TSA) plate. The plate was sealed with parafilm and was stored at room temperature for one week to allow for bacterial colonies to grow. At the end of one week, several colonies of different colors and textures had grown, and one colony was selected to be isolated. The colony was goldenrod yellow in color, circular and raised, had a smooth and shiny finish, and was about the size of a pencil eraser. A sample of the colony was transferred onto a new TSA plate using the quadrant streak technique as outlined in the handout for Lab 2: Aseptic Technique. The plate was incubated at 37 °C to accelerate colony growth. A new quadrant streak was performed every 3-4 days for a total of 4 times to ensure that purity of the culture had been achieved.

The culture’s susceptibility and/or resistance to various antibiotics was tested, following the protocol as outlined in Lab 9. The antibiotics used for the test were amikacin, cefazolin, clindamycin, erythromycin, gentamicin, oxacillin, tetracycline, and tobramycin.

DNA was extracted from the isolate for genomic analysis, using the PowerSoil DNA isolation kit and following the protocol as outlined in the handout for Lab 5. The DNA sample was then submitted to the UAF DNA Core Lab to be sequenced. When the raw genomic data had been obtained, it was then analyzed on BaseSpace, using the SPAdes Genome Assembler, Kraken Metagenomics, and Prokka Genome Annotation programs. The contig data was then analyzed using the NCBI Nucleotide BLAST program.

Gram staining of the bacterium revealed that the isolate was a Gram-positive cocci that formed tetrads and irregular clusters. In fluid thioglycollate the bacteria grew directly on and just below the surface of the fluid, and no growth was observed in the anoxic layer of the fluid, therefore the bacterium is likely a strict anaerobe. The isolate tested positive for the presence of the enzymes catalase and cytochrome c oxidase. The API 20E and API Staph assays had no positive results. Antibiotic resistance testing revealed that the isolate was susceptible to amikacin, cefazolin, clindamycin, gentamicin, tetracycline, and tobramycin, was intermediately susceptible to oxacillin, and was resistant to erythromycin.

SPAdes Genome Assembler discovered 300 contigs with the largest contig being 61,411 base pairs (bp). The total length of the genome was determined to be 2.51 Mbp, and the GC content of the genome was determined to be 72.72%. Prokka Genome Annotation discovered 53 tRNAs, 0 rRNAs, 1 CRISPR gene, and 2270 CDs. The Kraken Metagenomics program took 173,940 reads. Of those reads, 55,285 were classified, resulting in 31.78% of total reads being classified. 25.85% of the total reads were classified to the species level, and the bacterium was identified as Micrococcus luteus. Analyzing contigs via BLAST revealed that the sequence from node 21 was a 97% match to the genomes of the NCTC 2665 and trpE16 strains of M. luteus.

M. luteus is described in the literature as an aerobic, catalase- and oxidase-positive, Gram-positive non-motile cocci which form tetrads, with colonies being yellow in pigment, convex and smooth in texture with regular edges (Public Health England, Whitman et al.). The physical appearance of colonies of the isolate grown on agar plates, and physiological tests performed on the isolate are in agreement with these descriptions. Genome length and GC content of the isolate that were reported in SPAdes also agree with values in the literature (Hanafy et al., Whitman et al.)

Neither of the API assays that were attempted had any color changes, meaning that none of the tests came back positive. For the API 20E test, the lack of positive results is likely due to the test being the wrong fit for this microbe – it was meant to be used on Gram-negative anaerobes, and the isolate was a Gram-positive strict aerobe. It is possible that the reagents were unable to penetrate the thick peptidoglycan layer of the bacteria’s cell walls in order for metabolism of the reagents to occur.

The API Staph test should have been the best fit for the isolate. However, it still came back with no positive results. Researching the literature reveals that M. luteus should be able to metabolize glucose, fructose, sucrose, and mannose (Hanafy et al.), meaning that the GLU, FRU, SAC, and MNE wells on the API Staph test should have had color changes to indicate positive results. Some strains have been found to also metabolize maltose and trehalose, contrary to prior data indicating that these molecules were not utilized by M. luteus (Wieser et al.), meaning that there possibly could have been positive results from the MAL and TRE wells if the isolate was a similar strain. The literature also indicates that M. luteus is urease positive (Whitman et al.), so the URE well should have indicated a positive result as well. The lack of results from the API Staph test was probably due to not having a fresh enough sample: the instructions for the test call for a sample that is 18-24 hours old, and the plate that the sample was taken from had been incubating for between 4 and 7 days.

The isolate was found to be susceptible to most of the antibiotics that were tested, except for erythromycin, which it was completely resistant to. Resistance to erythromycin has been found to be due to a plasmid present in a strain of M. luteus isolated from human skin (Liebl et al.). With humans and companion animals having such an intimate relationship and being in contact with each other so often, it doesn’t take a stretch of the imagination to suggest that erythromycin-resistant M. luteus could be transferred from human skin onto the skin of a companion animal, or vice versa, which would explain the presence of erythromycin-resistant M. luteus on a stethoscope in a veterinary clinic. Horizontal gene transfer of this resistance plasmid could potentially cause other bacterial species to develop resistance as well.

Further investigation into the types of bacteria growing on medical equipment in veterinary clinics should be pursued. Only one of several different colonies from the original swab of the stethoscope was chosen for further evaluation. Analysis of the other colonies that were present on the original TSA plate would be the first step in continuing the investigation, followed by taking samples from other objects and equipment, and possibly obtaining airborne samples from around the clinic. This type of investigation would be very helpful in assessing local clinics’ risk of exposing their patients to nosocomial infections. 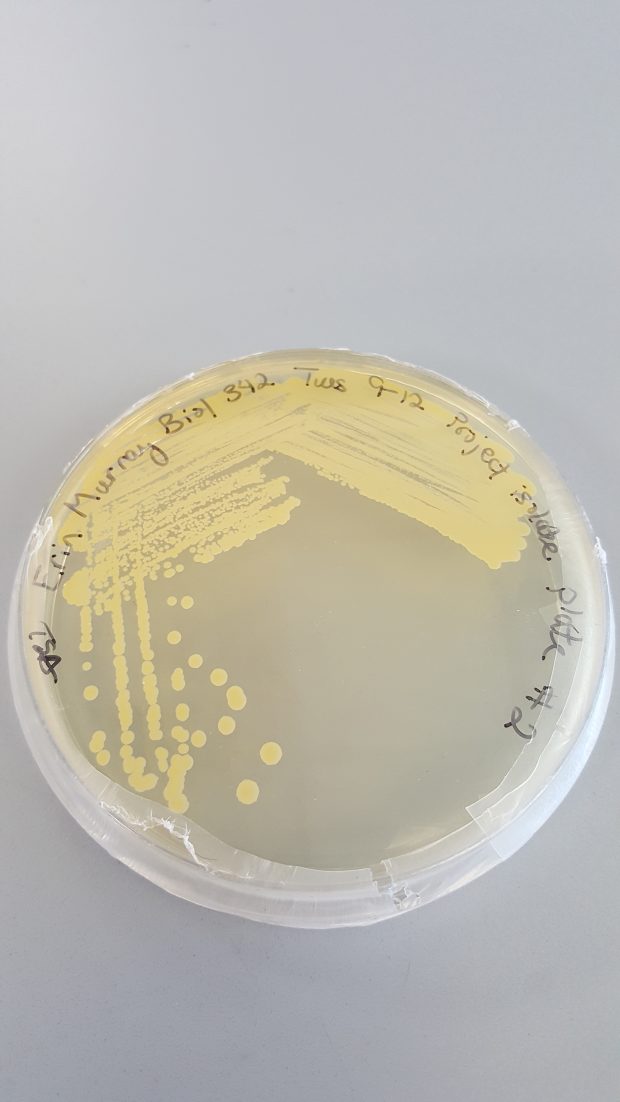 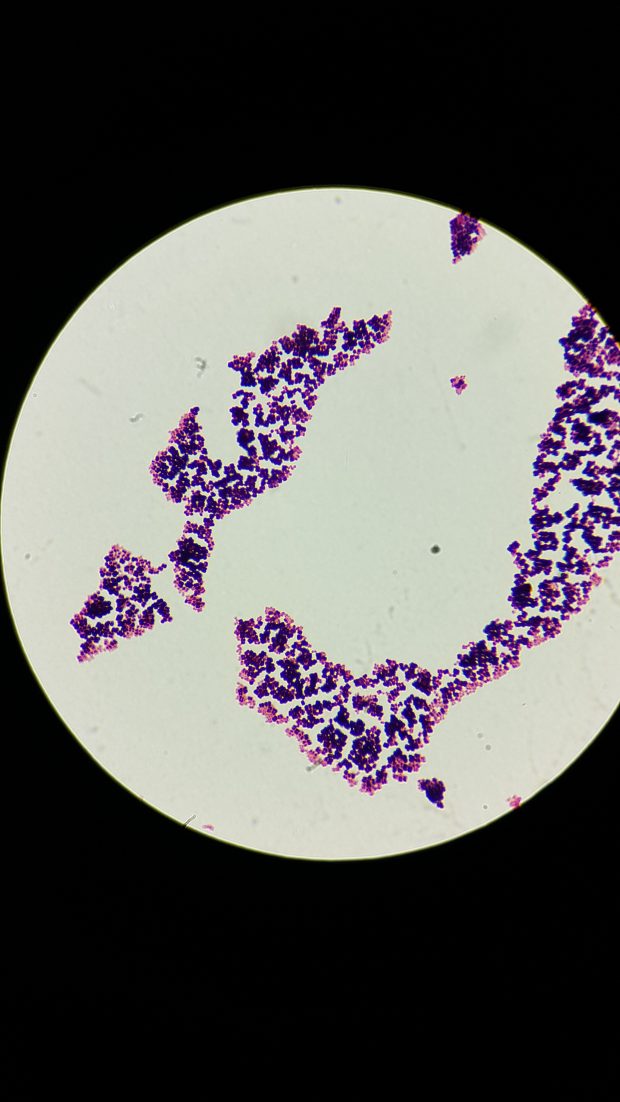 Figure 1. Macroscopic and microscopic morphology of the isolate. Colonies are yellow, convex, and smooth in texture with a regular edge. Gram staining reveals that the bacteria are Gram-positive cocci that form tetrads and irregular clusters. 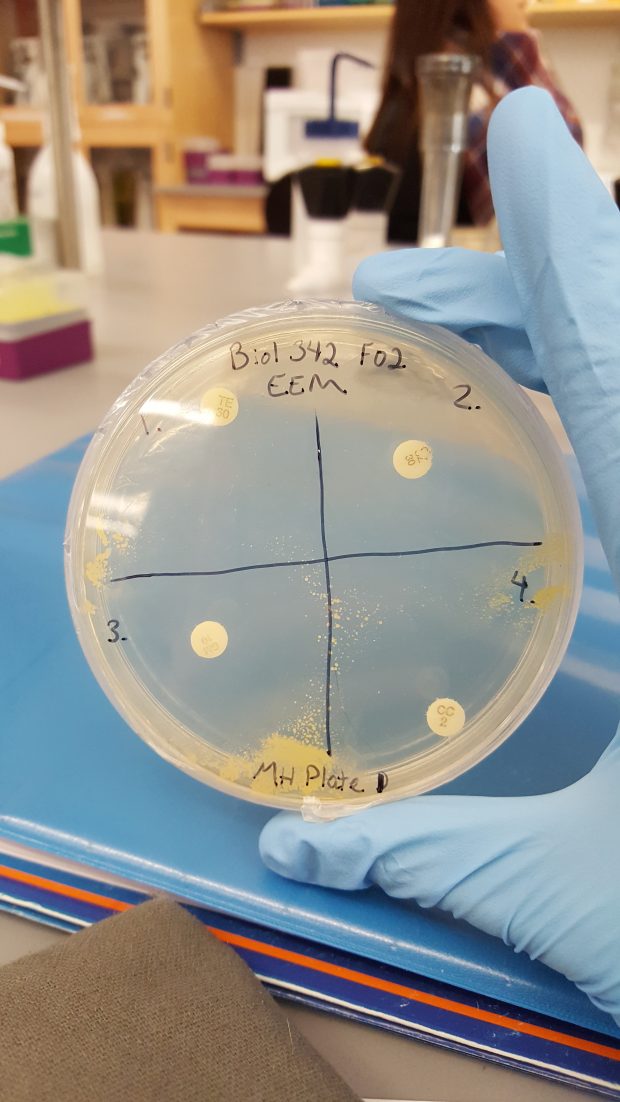 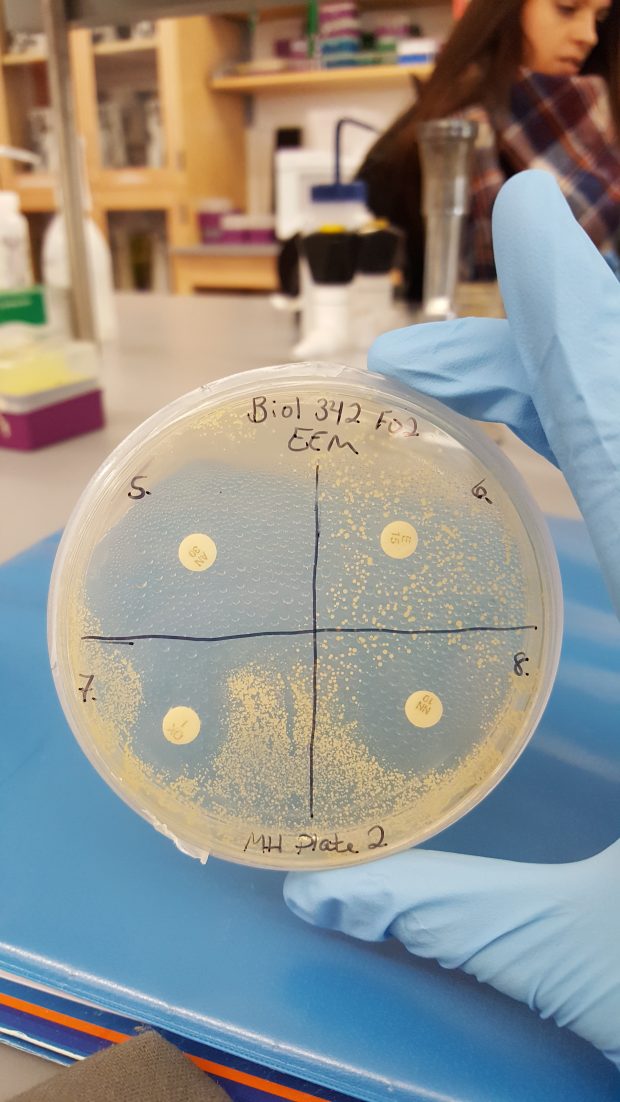 Figure 2. Antibiotic resistance testing of the isolate. The isolate showed resistance to erythromycin, but to no other antibiotic which was tested. Figure 3.  Krona Classification chart from the Kraken Metagenomics program. The reads were classified and nested into successive taxonomic groups, down to the species level.

1 Comment for “Micrococcus luteus in a Veterinary Clinical Setting”

I apologize for the large size of the photos. I was unable to crop and resize the photos in this program like I was able to in Google Docs.