It has long been the practice of well-meaning parents to encourage their offspring to pick up a musical instrument, in the hopes that it will make them smarter, more disciplined, or more attractive to selective schools. Whether or not any of these hopes are realized, few parents likely recognize the potential dangers lurking within the wind instruments their children play. Several authors have documented respiratory infections, some of them serious, contracted from saxophones (Lodha & Sharma, 1988; Metzger et al., 2010), trombones (Metersky et al., 2010), and other woodwind and brass instruments (Glass, Conrad, Kohler, & Bullard, 2011; Marshall & Levy, 2011; Rackley & Meltzer, 2011). While not all microorganisms are inherently pathogenic to humans, the warm, moist (and rarely cleaned) interior surfaces of wind instruments provide a prime environment for a wide variety of pathogenic and non-pathogenic microbes to grow.

The objective of this paper is to isolate, characterize, and identify a slow-growing bacterium collected from the interior surface of a metal flute headjoint. Methods used to identify the bacterium include a battery of physiological testing and genomic sequencing.

Intriguingly, this microbe was one of only two from the sample capable of growing under room-temperature conditions on TSA. This is consistent with previous studies that have found reduced microbial loads on non-reed wind instruments compared to reed instruments (Marshall & Levy, 2011).

Two damp, sterile swabs were used to collect microbial samples from the inside surface of a metal flute headjoint, just below the embouchure hole. The flute had been played but not cleaned approximately twenty-four hours previously. The swabs were then used to inoculate a trypticase soy agar (TSA) plate which was then incubated at room temperature for five days.

Once visible colonies had formed, a single colony from the TSA plate was used to inoculate a fresh TSA plate using the streak plate method. This was repeated once more to obtain a pure culture.

The pure culture was examined for details about colony size, color, shape, distribution, and other relevant colony morphological characteristics. A Gram stain was performed on the isolate using the procedure outlined in Lab Handout 4, and the stained isolate was examined under the microscope for the aforementioned morphological characteristics, as well as to determine if the isolate was Gram positive or Gram negative.

Catalase and oxidase tests were performed to determine the enzymes used by the isolate in the electron transport chain, and a suite of 21 physiological tests (including tests for fermentation of glucose, mannitol, sorbitol, and others) were performed using an API 20E test strip. Protocols for each of these tests, described in Lab Handout 6, was followed exactly.

A trypticase soy broth was inoculated with the isolate, but did not yield enough cells to perform a proper genomic DNA extraction, so additional colonies from an agar plate were added to the broth culture immediately prior to DNA extraction. Excepting this detail, genomic DNA extraction protocol described in Lab Handout 5 was followed. Using a PowerSoil DNA kit, DNA was isolated from the liquid culture and sequenced using the Illumina MiSeq DNA sequencer.

The isolate colonies appeared to be perfectly circular, and quite small (<2mm diameter). They were a consistent matte coral-pink color, and projected slightly from the surface of the agar plate. The colonies were incredibly slow-growing, and it took three days for the initial environmental sample to demonstrate visible microbial growth. Growth rates did not appear to be affected by temperature, and the isolate was similarly slow-growing in 37oC incubator and 4oC  refrigerator alike. When viewed under the microscope, the cell morphology was difficult to discern – the cells could either be irregularly shaped and arranged in chains, or elongate with constrictions along each cell (Figure 1). 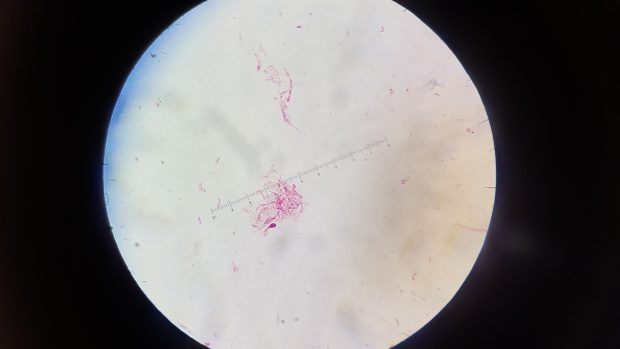 Results of the Gram-stain indicate that the isolate is Gram-negative. Tests for catalase and oxidase were also negative. Results from the API 20E test strip are shown in Table 1. The only positive physiological tests for this isolate were for arginine dihydrolase, gelatinase, and glucose metabolism. Arginine dihydrolase is present in cells that use arginine as a source of carbon and energy, gelatinase is used to break down gelatin into useful sub-compounds, and glucose fermentation enables cells to use glucose as a carbon source and produces acidic byproducts.

Genome assembly software yielded 347 contigs of greater than 1000 bp in length from the isolate, with a maximum length of 45702 bp. Functional gene annotation software found 55 tRNAs within the isolate sample, and a total of 2197 coding genes. Metagenomic analysis classified the isolate as Micrococcus luteus, with 98.75% of reads classified to the species level (79.85% of analyzed reads).

As M. luteus is morphologically and physiologically unlike the isolate in question, contamination was suspected. Further bioinformatic analysis conducted by Dr. Eric Collins suggests the isolate is another species within the genus Micrococcus, and likely possesses the mercury(II) reductase gene. This gene enables the microbe to use elemental mercury, NADP+, and H+ as substrates for the generation of NADPH, with Hg2+ as a byproduct.

The morphological, physiological, and genetic results of this study are inconsistent and inconclusive. Morphologically, the isolate cells bear some resemblance to fungal hyphae, but considering that nothing grew on the Sabouraud agar plate, which selects for fungi, this result is highly unlikely. Genetic sequencing suggests the isolate may be the species Micrococcus luteus, but morphological observations and physiological tests do not align with this species identification. M. luteus forms yellow or greenish-yellow colonies on plated cultures, and the cells are cocci arranged in tetrads, while the colonies of this isolate are pinkish-coral colored with irregularly shaped, elongate cells (Kocur, Pacova, & Martinec, 1972). Furthermore, M. luteus is a Gram-positive, oxidase-positive, gelatinase-positive species, while this isolate is Gram-negative, oxidase-negative, and gelatinase-positive (Kocur et al., 1972).

Additional bioinformatic analysis done by Alexis Walker suggest another possible species within the genus Micrococcus – M. roseus is similar in color to the isolate, and is also oxidase-negative (Mohana, Thippeswamy, & Abhishek, 2013). However, both M. roseus and M. luteus are catalase positive and negative for arginine dihydrolase, which is inconsistent with the physiological test results of this isolate. A summary of morphological and biochemical characteristics for M. luteus, M. roseus, and this isolate appears in Table 2.

Bioinformatic analysis done by Dr. Eric Collins suggests that the genus Micrococcus may be a viable identity for this isolate, even if M. luteus and M. roseus are not. Species within the genus Micrococcus are ubiquitous, and can be found on human skin and any surfaces human skin has been in contact with, which potentially includes the surfaces of a musical instrument (Government of Canada, 2011). However, all known species of Micrococcus are Gram-positive, which this isolate is not (Government of Canada, 2011; Mohana et al., 2013).

Additionally, Dr. Collins’ analysis identified the mercury(II) reductase (merA) gene as a likely component of the isolate genome. The merA gene is part of the mer operon, which reduces Hg(II) to Hg(0) and operates optimally at a slightly basic pH and temperatures between 37â„ƒ and 45â„ƒ (Giovanella, Cabral, Bento, Gianello, & Camargo, 2016). This isolate was sampled from the inside of a flute headjoint composed of silver and nickel, both of which are known to have some inhibitory effect on bacterial growth (Argueta-Figueroa, Morales-Luckie, Scougall-Vilchis, & Olea-MejÃ­a, 2014/8; Clement & Jarrett, 1994). It is possible that the isolate used a similar resistance mechanism to the merA gene to live in a silver and nickel enriched environment, but that mechanism was not found and is purely conjectural.

This isolate is extremely slow-growing, and ultimately did not survive in plated culture for more than seven weeks. As such, it was not possible to streak a sufficient number of plates to guarantee that the culture was pure, though it visually appeared free from contaminants. It is likely that M. luteus was a contaminant in the culture or was introduced as a contaminant during the DNA extraction process. Additionally, because the cultures used for physiological tests were two weeks old or older, the results of those tests may be invalid.

In conclusion, the results of morphological observations, physiological tests, and genomic sequencing are inconsistent, and these inconsistencies could be due to incorrect lab techniques, contamination, or other factors. In future, when characterizing this microbe, it would be useful to test different growth media and incubation temperatures, as TSA and 37â„ƒ were clearly not favorable growing conditions for this organism. Additionally, it would be fruitful to extract and sequence several samples of DNA from multiple colonies, to increase the probability of identifying non-contaminant sequences.