Intro: Microbes are everywhere, even in the most extreme environments and conditions. They can be found in boiling hot springs; they can be found in frigid waters in the artic. They can even survive in conditions that have very little of even no oxygen, using glycolysis and alternative electron acceptors to create ATP. With this almost universal range of survivable living conditions that microbes can live in (particularly bacteria), it would be reasonable to assume that there would be at least one variety living in such a nice, wet, and aerated place as my shower drain. Therefore I used this as my location to take my environmental sample from. I would hypothesise that because we clean our shower regularly, that most of the bacterium un the shower drain would come from people in my family taking a shower, and mostly be from the skin. Organisms commonly found on the body include Micrococcus, Staphylococcus, and Corynebacterium species (Dermnet New Zeland). These residential skin organisms are also fairly ubiquitous in the environment. We were aiming to isolate a bacterium from this initial environmental sample by using repeated quadrant streaks to isolate single species colonies, therefore producing a pure culture that we could do a multitude of tests on which include Gram staining, genetic analysis and antibiotic testing along with many other tests. Based on the place of origin of the bacterium that I isolated, I hypothesize that it will either be one of the above bacterium or a similar water loving organism, likely one that also forms a biofilm. I also hypothesize that it will be an aerobic organism, given that I found it in a well aerated environment and it has survived until I cultured it. When looking back after culturing the isolate, these hypothesies were supported by several of the tests, and served as a good tool to steer me towards what the isolate may be.

Methods: To start isolating the bacterium, I used a sterile swab wet with deionized water provided by the lab to pick up bacteria from the shower drain. I then streaked the exposed swab onto a petri dish to allow the organisms to grow, incubating them at 25 degrees Celsius in a dark cabinet. Then to actually isolate a bacterium, I chose a colony from the initial plate and did a quadrant streak of it to further isolate the bacterium, and then incubated it at 38 degrees Celsius for a week. I then repeated this three more times to further purify the isolate. I then transferred the pure culture into a TSB slant to preserve it, keeping it at around 3 degrees Celsius in the lab refrigerator.  To identify our isolate after obtaining the pure culture, we performed many different tests. I performed a Gram stain test to identify if the bacterium was gram negative or positive, as described in the Lab 4 handout. Another test I did to identify my isolate was DNA analysis, described in lab handouts 5 and 7. I isolated the DNA by lysing the cell and using the Power Sol DNA Isolation Kit to isolate the DNA from the other parts of the cell. After it was sequenced using an Illumina MiSeq at the UAF Core lab, I used the online program Base Space to analyze the reads that I got from sequencing. I used Prokka Genome Annotation to identify which genes are present in the bacterium, Kraken Metagenomics to identify what the DNA reads correlated to on different taxonomic levels, and SPAdes Genome Assembler to determine how many contigs were produced from the reads that were produced. Another set of tests that I performed were physiological tests, including testing for oxygen class with fluid thyoglycate, checking for catalase using hydrogen peroxide, checking for cytochrome c oxidase using oxidase test strips, and using an API 20 E test strip to test for various different physiological traits such as Sulphur reduction, which had 20 different tests. All of these are described in the lab 6 handout and were kept in the incubator at 38 degrees Celsius. Finally I used different antibiotic disks to check for its resistance to antibiotics, using Gentamicin, Cefoperazone, Vancomycin, Tobramycin, Amikacin, Trimethoprim, Oxacillin, and Cefazdin. I used the Kirby-Bauer, or disk diffusion test to test for this, described in lab handout 9.

Results: Regarding the gram stain test, my isolate was gram variable, I ensured that the strain was fresh so that the age of the culture was the same throughout the test. Most of the bacterium in the gram stains were gram negative, but a significant amount, about twenty percent, showed up as gram positive. The colonies are a pale, translucent yellow, and are shiny when looked at in the light. They are fairly small as well, usually about a millimeter in diameter and of a normal height. Under the microscope they are round cells.

When looking at the genetic tests, most of the identified strains in the Korona test are Micrococcus luteus. The identified reads only made up a total of twenty seven percent of the total reads, but the majority of those reads were for M. luteus. The confidence on that reading is decently confident, evidenced by the blue coloring. The results of this analysis are shown in table 1. 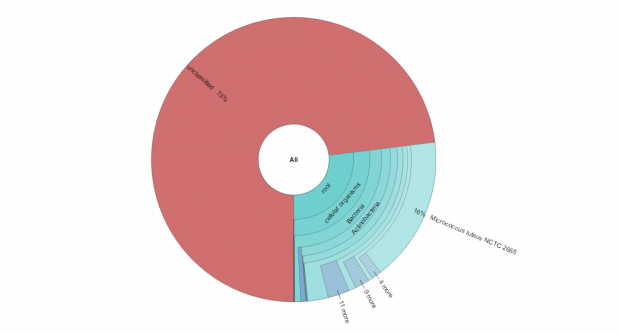 Table 1: Graph from Korona showing the percent reads of each organism, and to which taxonomic level. 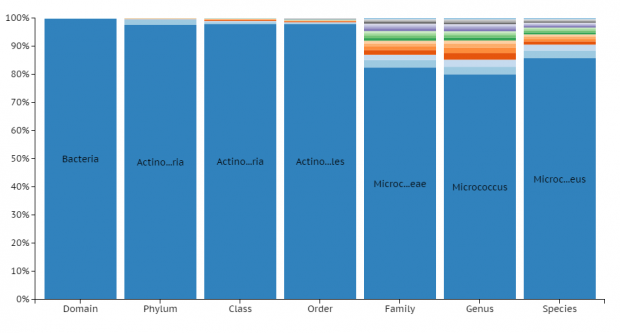 Table 2: Graph of the genomic reads by taxonomic level using Korona. M. luteus is the majority of reads on the species level.

When performing tests for physiological traits, the results were limited. When using a fluid thyoglycollate test it resulted in the isolate being a strict aerobe, with all of the bacterium being at the top of the medium where it is oxygenic. The oxidase test was negative, as the strip did not change color at all, where it would have turned purple if it was positive. The catalase test did return positive by bubbling, indicating that it does have the ability to break down the radical hydrogen peroxide into diatomic oxygen and hydrogen. Finally, when looking at the API 20E strip none of the results returned positive despite the culture being active and fresh from being streaked recently.

When looking at the antibiotic test results, the isolate is resistant to none of the applied antibiotics, and is only lightly to intermediately resistant to oxacillin. The Gentamicin, Cefoperazone, Vancomycin, Tobramycin, Amikacin, Trimethoprim, and Cefazdin antibiotics showed obvious susceptibility, with most of them having enormous rings of 50 to 52 millimeters while the threshold for resistance is only 15 millimeters. Of those only Vancomycin was closer than 50 millimeters, being 38 millimeters.

Discussion: When looking at all of the results for my isolate, they are not all consistent with Micrococcus luteus. The Gram stain, while it was gram variable, does not ideally match with the genetic test that resulted in Micrococcus luteus, which can be gram variable but is usually gram positive (Bonjar). On top of that, most of the bacterium that were stained were gram negative, which conflicts with this result. The negative oxidase result conflicts with M. luteus (Public Health England). The API 20 E test strip results revealed nothing about what the isolate uses as an electron acceptor because every result was negative, and that it likely only uses glucose as an energy and carbon source and oxygen as its electron acceptor. It did not reduce sulphur, digest gelatin, or reduce nitrate, among some of the more interesting tests, which all disagree with M. luteus. I suspect that the API 20E test strip results were negated by having used an inactive colony, as the fluid thyoglycate test failed as well. These results might not be trustworthy.

Many of the tests did line up with M. luteus though, such as the fluid thyoglycate test, which showed that it was an obligate aerobe. M. luteus is an obligate aerobe (Medical Laboratories). The positive catalase result lines up with M. luteus (Public Health England). The colony morphology of being yellow, shiny and smooth line up perfectly with M. luteus (Public Health England). The antibiotic resistance test showed only minor resistance to the antibiotic Oxacillin, which is likely due to a chance inheritance in the population or complete chance because of the weak strength. The organism itself is susceptible to almost all drugs, with a few strains being resistant to nitrofurantoin, macrolides and lincomycin (Public Health Canada). This lines up with M. luteus’ resistances from the tests.

The Micrococcus genus is known to be found on dust particles, in water, on skin and skin glands in vertebrates, and some species can be found in milk. They are fairly ubiquitous in the environment, and are small (0.5 to 3.5 micrometers in diameter) and non-motile. This fits well with where I sampled my bacterium from, as a shower drain is a place where both dust and water would accumulate, along with residues of skin glands from showering. It is an opportunistic pathogen, only pathogenic enough to cause disease in weakened immune systems (Medical Laboratories). The colony morphology is the same as well, being round, shiny, and sort of flat (Medical Laboratories).

When looking back at all the data, it is fairly likely that the isolate is Micrococcus luteus, especially when looking at the fluid thyoglycate test, the colony morphology, and the antibiotic susceptibility. The tests that did not agree were most likely from not having an active colony used in the experiment, such as the oxidase test being negative or the API 20 E test strip showing that the isolate did not reduce nitrate, which it does, referencing Medical Laboratories. I also had to do the thyoglycate test 3 times to get a conclusive result, further making me skeptical of how active the culture was during the physical tests during week 6, which is where almost all of the inconsistencies arose.

If I were to continue researching this isolate, I would redo the API 20 E test strip with a fresh, active culture to ensure that it can reduce nitrate, and also the oxidase test to ensure that it does have cytochrome c oxidase present, which it should according to Public Health England. Further tests that I would do would be testing how much heat resistance it has, the density of a broth suspended sample using a dilution series, test for more antibiotic resistances, and how well it can grow in antibacterial mediums and mediums of different pH levels.