Below  is a link to my lab report. 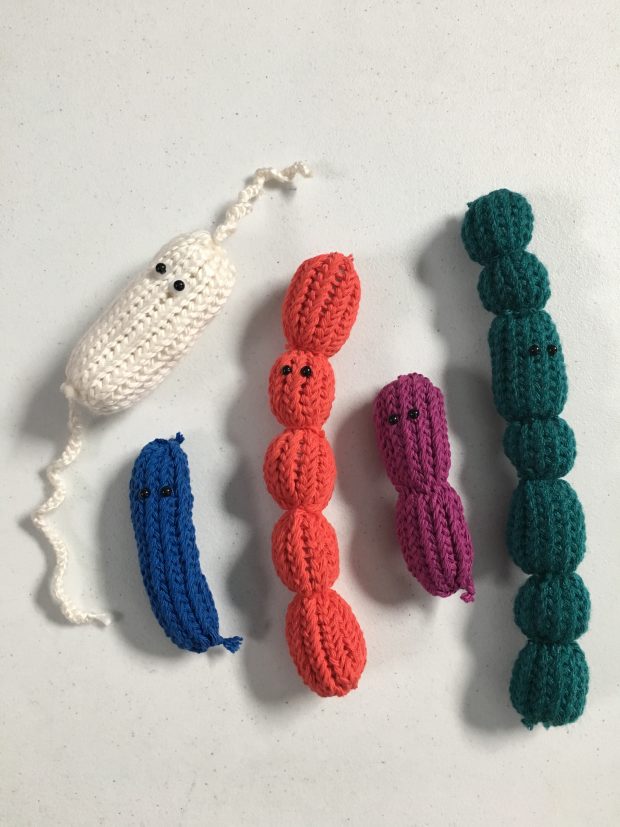 For my project I decided to knit different types of microbes to show just how different they can look. Although, I have to admit that I didn’t come up with the idea myself, I found it while looking around on Pinterest. I looked at some of the different microbes people had made and came up with the ones I thought I might be able to make. The microbes that I chose are Cyanobacteria (green), Staphylococcus (pink), Streptococcus (orange), Bacillus cereus (blue), and Pertussis (white). The goal of this project was to show, roughly, how different microbe morphology is. To make these microbes I used yarn, stuffing, and safety eyes to give them some character.

Summary: Researchers at the University of North Carolina have transformed adult skin cells into standard stem cells and then turned those into neural stem cells. They then engineered the cells to home in on tumor cells in the brain and deliver common cancer treatments to glioblastomas in mice. They found that mouse tumors injected directly with the reprogrammed stem cells shrank 2% to 5% in 24 to 28 days.

Connection: This study is another option being explored to target cancer cells. But this study is looking at harnessing stem cell’s ability to home toward tumor cells and instead of thinking the tumor is a wound that needs to be healed, it can be changed and manipulated to deliver cancer killing drugs. This shows how you can use the targeting mechanism the cancer cells use to attract the stem cells as an advantage but changing the genetic make up of the stem cells but not what the shell.

Critical Analysis: I found it interesting that the stem cells are able to find and move to the cancer cells. I’m also surprised that it seems to be working in killing cancer cells and reducing tumors. I think this article did a good job in communicating science to the public because they explained what glioblastoma is in case people didn’t know. They also did a great job of briefly explaining the experiment without losing the attention of the audience by using the appropriate level of vocabulary.

Question: How will the researchers improve this method so that the tumor-targeting cells can migrate the distance it needs to in a human brain?

Summary: Researchers have modified Salmonella bacteria to trigger a immune response against human cancer cells that were implanted in mice. The bacteria was able to shrink the tumors and prevent them from metastasizing. The researchers took a harmless version of Salmonella typhimurium and genetically modified it to secrete a protein known as FlaB. They injected the modified Salmonella into 20 mice with human colon cancer and after 120 days the tumors were undetectable in 11 of the 20 mice.

Critical Analysis: One thing I found interesting in this article is that after 3 days of the rats being injected, the researchers found that the mice had cleared the bacteria from their livers, lungs, and spleens, but the tumorous tissue in their colons were still crawling with Salmonella. I think this article did a good job of communicating science to the public because they talked a little about the previous study that inspired this one. It also did a great job of briefly explaining the experiment and how it was done.

Question: They said that it appeared FlaB activates a secondary molecule called TLR5 that makes the immune cells more aggressive, but how and why does FlaB activate TLR5 more easily than other molecules or proteins?

Summary: Researchers from the University of Tubingen in Germany discovered a bacterium in our nose that could help in fighting pathogens. The bacteria they found is Staphylococcus lugdunensis which can produce a chemical called lugdunin. Lugdunin is bactericidal against major pathogens and is not prone to developing a resistance in the pathogens that it kills.

Critical Analysis: What I found the most interesting about this article is that because so many pathogens are developing a resistance to current antibiotics Andreas Peschel, a researcher who authored the study, predicts that in ten years, more people will die of diseases caused by resistant bacteria than cancer. I also wish the article went more in depth about the study and how the researchers discovered this bacterium.

Question: How or why are the targeted pathogens not prone to developing a resistance to lugdunin? 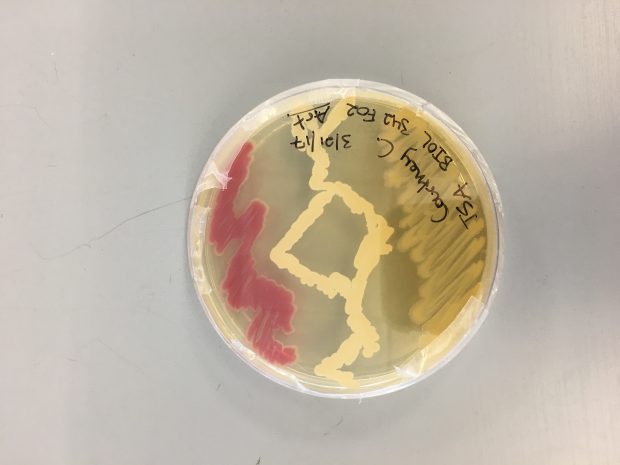 The best picture that came from the three plates I did was my TSA plate. You can clearly see that I used three different types of bacteria for my picture. The picture is of maintains with the aurora over them and open land in front of them. I am really happy with how this plate turned out because the color of the three bacteria are very vibrant, especially the red bacteria.

My name is Courtney Cox and I am in my second year of college and I am a Biology major.