So, I wrote this poem with the intention of creating a way to study. It’s a lot easier to remember terms when they rhyme so I figured it could be fun to give it a shot. I’ve never really done anything with poetry since a class in 8th grade, but couplets have always been my favorite. I really like how they make short little rhymes and they glue themselves in your head. I never would have thought that half of these words would ever fit into a poem, but if “spontaneous generation’ can flow smoothly, there’s not many words that couldn’t.

Ideally, I’d make the poem much longer and cover all the topics that we have gone over in class. I wanted something that flowed through the path of things we had learned over the semester, but I had to leave out several major topics due to the time constraint. Before presenting my poem in class, I’d like to add on to it to better cover the topics that I missed.

The poem can be read really anyway you’d like to read it. I more-or-less put the stanzas in the order that we learned about them, but I feel like each individual one could still stand out on its own. As I said before, I didn’t cover everything, I hope each little rhyme is able to stick in your head and maybe help you out on the final.

Controlling the world, that’s their game

Coccus, Bacillus, and in-between too

There’s not one thing microbes can’t do.

On almost any surface they do thrive.

Leeuwenhoek saw them at 200 X

But where did they come from, these little specs?

Next came Pasteur, with his swan-necked flask

He’d prove them all wrong, he was up to the task.

Discoveries were made, but the results were ignored

Semmelweis shouldn’t have been fired, he deserved a reward.

The people realized that cleanliness was needed

Thanks to Nightingale and Lister the people conceded.

What we’ve learned so far is just the beginning

It’s like a game of baseball, but only second inning.

With advances like staining, we divide them in two

Positive or negative but purple, pink, and red in our view

The can grow and be counted using several different tools

Defined and complex media each have their own set of rules

We have plate counts, slide counts, and turbidity too

Indirect requires a direct method, but I’m sure that you knew.

Microbes can move wherever they please

Some use flagella, swimming with ease

Or maybe act like Spiderman just give it a go

You need twitching motility to be this hero

Microbes consume everything from rocks to light

Metabolic pathways can go down any different path

Try using an electron tower, but double check your math

Forget antibiotics if you catch some of these

Whether it’s lysogenic or lytic the cycle ends the same

Your cell gets destroyed with nothing to reclaims

Antibiotic resistance is a big problem we face

Will the war ever end? I’m not so sure

But stay clean, be healthy and you’ll endure

My article is called ” Florida fights Zika virus by releasing thousands of bacteria-infected mosquitoes.” The link is  https://www.independent.co.uk/news/florida-zika-virus-mosquitos-infected-bacteria-keys-wolbachia-aedes-aeqgypti-a7695706.html. The article was published on 04/21/17

Summary: The Mosquito Control District has injected 20,000 male mosquitoes with Wolbachia bacteria that prevents the eggs from hatching after mating. They’re going to release the male mosquitoes in several stages with the infected males outnumbering the wild males seven to one. The goal of this first trial is to prevent diseases like the Zika virus and Dengue fever from spreading to people through mosquitoes. This 12 week trial should dramatically lessen if not eliminate the amount of mosquitoes in the Florida Keys test area.

This applies to what we’ve been learning in class because it is a method to stop the transfer of pathogens. By using harmless to human bacteria, we can prevent the spread of disease to ourselves from other animals. If this works, it could also stop the spread of malaria and other diseases in Africa from mosquitoes.

I thought this article was interesting because mosquitoes are responsible for so many of the different diseases that are spread to humans. If we could find a way to stop this, then the quality of life rises for everyone. While I would prefer we didn’t have to eliminate the mosquito population, it could be worth it to lower the risk of disease for people.

Can you see any consequences from eliminating the mosquito population? Is it too good to be true?

The title of my article is “Glowing bacteria offer hope for safe detection of 100m landmines.” It comes from an online news site called The Guardian. It was posted on 4/13/17.

Summary: Researches have modified a bacteria to fluoresce when it comes into contact with the vapors of hidden land mines. The researchers noticed certain plants react to these vapors and modified bacteria to do the same. They scan the area with a laser to see the fluorescing bacteria and find the land mines.

This relates to what we’ve talked about in class through applications of microbes to benefit human life. By taking microbes and making small changes to their genome, we can entirely change their function. By using these bacteria, we are able to find explosives that could have otherwise hurt people.

I just thought this whole story was pretty neat. I know there’s a lot of talk about modifying microbes, but you hear very few stories that are actually successful. This article seems to be true to me. They admit that this group of researchers are not the first to develop bacteria that glow when exposed to explosive vapors, but they are the first to discover a way to detect the fluorescing bacteria.

If you could modify a microbe, what would you make it do? 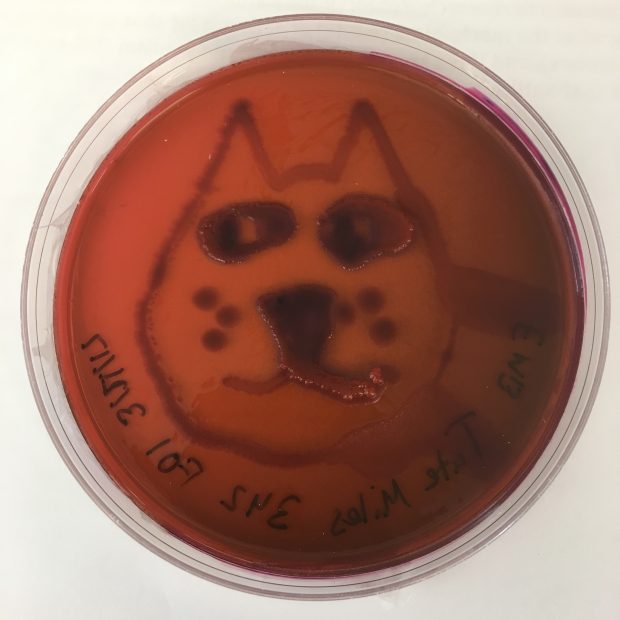 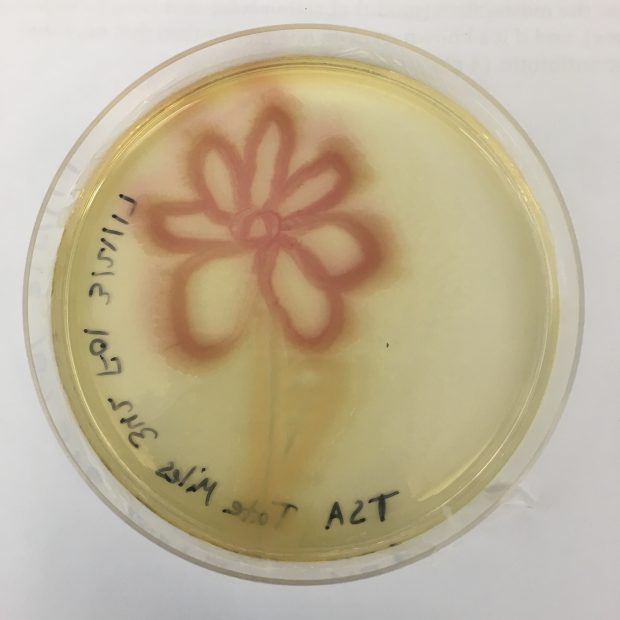 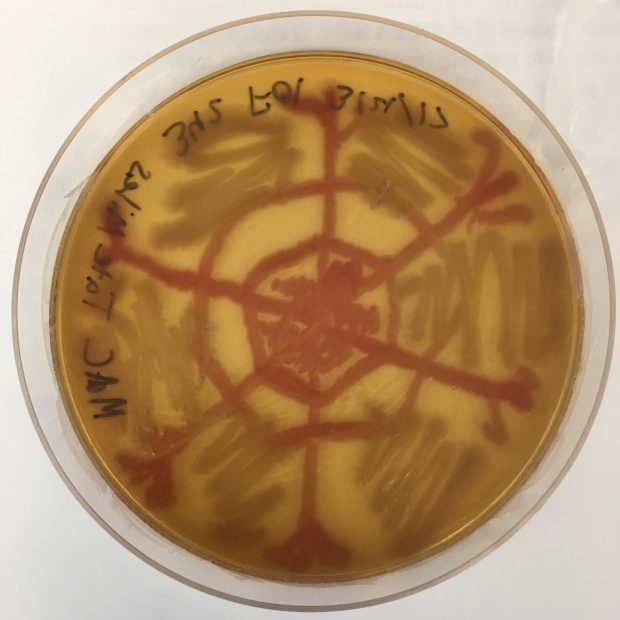 I don’t consider myself to be extremely artistic, so I chose three simple designs that I could somewhat portray. The first piece is a cat drawn on the EMB plate. I attempted to make the eyes yellow, but it looks like there was too much growth in the eye area. It was difficult to draw on this plate. The second piece, my favorite, is a flower drawn on the TSA plate. I chose to do a flower on this plate because it seemed to have a larger range of colors than the other plates. I’m ready to be done with this snow outside! The third piece is a snowflake drawn on the MAC plate. It ended up looking more like a spiderweb, but I’m still happy with it. I tried to show the radial symmetry of a snowflake with a color that would stand out. I filled in the empty space for contrast.

Simon’s presentation was divided into three main sections. First, he gave us some background information for his studies and stated why studying microbiomes was important. He then talked about his first study where he mapped microbial communities in the home. The seven homes he sampled had a range of people living there and some had pets. They sampled the hands, feet, and noses and compared them to surfaces around the home such as door knobs and counter tops. He found that the microbial communities of each house matched their occupants. Each person has their own microbial fingerprint that seems to be left in the home. Doorknobs matched the microbes found on hands while the bedroom floor matched samples from the feet. When a person leaves, their microbial fingerprint begins to decline over the next few days. He was trying to answer questions such as: Do the microbial communities of home surfaces match their occupants; how unique are microbiomes in homes; what are the major interactions between people and their homes; and how stable are microbiomes on home surfaces? Lastly, he went over his study of microbial development in the hospital from pre-opening to patient care. There was a complete change in the microbiome between pre-opening and patient care. Completely new microbial communities were found as more people frequented the areas being tested. There were no real trends found in the distribution of microbial communities. Especially on the floor, there was a homogenous effect, possibly because people walked everywhere. Objects in the hospital that were often in contact had similar results. This included nurses with their pagers and phones, and patients with the handrails on their beds. An interesting result he found was that antibiotics had no real effect on biota on the skin with the exception of topical creams such as neosporin. The results of both of his studies were based on the 16s method using amplicon sequencing.

I thought his presentation was really interesting and I’m really glad I went to it. I didn’t understand the entire thing, but I’m pretty sure I was able to understand most of it because of the classes I’ve taken for biology so far. The results that he found seemed to be in line with most of his predictions and they made sense to me as well. By creating these maps of how microbiomes move, we can track disease and be able to predict how the biomes will change over time. It sounded like most of his experiment came from swabbing the samples, just like we have done with our microbe project. By learning how to do this in class, I was able to understand how he went from taking samples to turning them into data to answer the questions he posed. But even with the results he found, there could still be hundreds more species that were not able to grow in culture. One question I have is: Would outdoor pets versus indoor pets have a differing spread of microbial communities throughout the home? The house with 3 dogs appeared to have a more diverse and spread out microbiome. How much more would an outdoor pet diversify the microbes found?

“Your A.T.M. Is Covered in Microbes, but Mostly Harmless”

This article talks about how A.T.M.’s show all kinds of different microbes from all over NYC. For this article they swabbed 66 keypads from all around the city, similar to what we have done for our culture experiments. Their results showed the machine had microbes that are  often found on human skin. Small traces of food were also found and also a mold that is found in spoiled baked goods. This study is a small part of an attempt to study the microbiome of NYC.

The article seemed to be reputable and fairly straight forward. They were just reporting the results they had received from the swabs. They possibly didn’t report all of the microbes they found to try and not scare anyone. I’m the the A.T.M.’s were also covered in diseases, but none of that was mentioned. It would be interesting to see the complete study and the other areas they decide to test to try and complete the NYC microbiome.

Do you think we’d have a pretty similar result of microbes on an ATM in Fairbanks? Why or why not?

My name is Tate Miles and I am a sophomore working on a degree in Biological Sciences. So far I don’t know what I want for a concentration, but I’ve been thinking about cell and molecular biology. I’ve lived my entire life in Anchorage, Alaska, but I love to travel. Biology is something I’m really interested in and I look forward to learning as much as possible from this class. 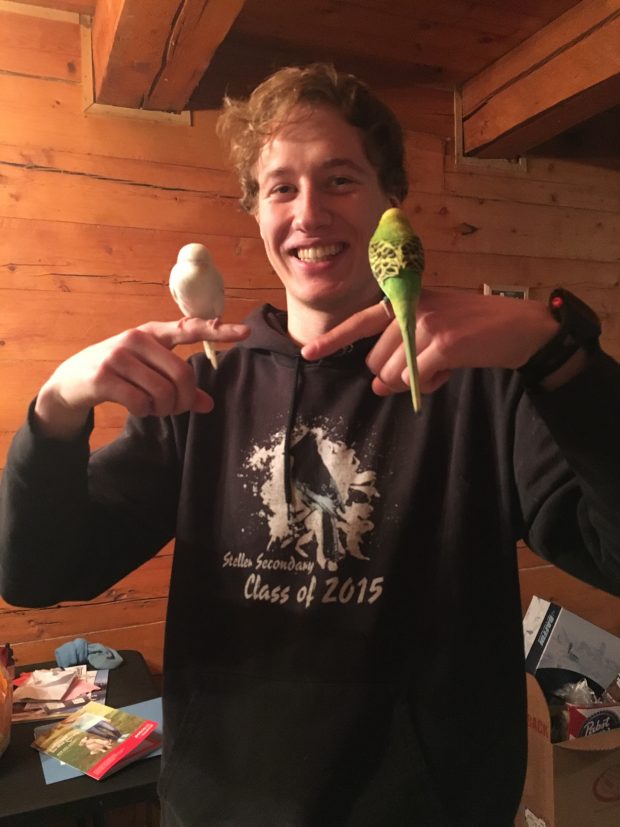