We are vast and small but we cover it all

On stones, on walls, and even your skin we crawl,

While the rest decline,

A force of reckoning lies behind these walls.

The machinery of life we’ll break and stall.

These microbes will learn,

Our presence will cause their tumble and fall.

Chemical warfare we did not foresee.

Our colony’s at risk and cannot flee.

But a solution I laid,

These invaders will not harm me

We lived normal lives but now we stop.

This world is turning as our resources flop.

Next generations will reap,

Little spores in their sleep,

Awaken when your food is tip-top.

We began small with cells amounting to few,

But save for next as our population flew.

Until the death toll rose,

Then things go down and the rest die too.

These are 5 poems covering various topics covered in class for microbiology. Ubiquity of Microorganisms  attempts to convey the idea that microbes are everywhere but the presence of specific microbes will depend on the type of environment being looked at. Antiobiotics  is a poem in the perspective of antibiotics invading a bacterial cell. In order to kill off the microbes, these antibiotics are impairing their ability to replicate and survive by interfering with the internal cell processes such as their metabolism, transcription, translation, replication, etc. Resistance  is a sort of response to Antibiotics. Whatever the invaders have planned for the cell is now unfeasible because the bacteria has resistance. The phrase “structures subtly remade” comes from the idea of protein mutations preventing any of the antibiotics from attaching to important proteins and enzymes. In this imaging of it, it could be a plan for sabotage by the antibiotics where they planned to loosen all the screws or bolts off of something but only thought to bring one type/size of screwdriver. If the bacteria happens to have the size of screws used in their structures be of the wrong size, the antibiotics really cant do much. Endospores  turns the bacteria into  individuals leaving the next generation of baby/unrealized bacteria into stasis until a good environment is found. Exponential growth  attempts to put each phase of bacterial growth into a line. These phases include lag phase, log/exponential phase, stationary phase, and the death phase. I hope you guys enjoy my attempts at poetry!

An invasive species of fungus,Batrachochytrium salamandrivorans, from Asia is causing mass death of fire salamanders in the Netherlands, Germany and Belgium. Affected salamanders have a survival rate of 13% over a 10 day period and the fungus only requires a few spores to cause issues. Additionally, these spores are resistant to changes and weather conditions which prolong their presence in the environment. Currently, the European Union has launched efforts into researching a scientific basis for controlling this salamander fungus epidemic.

This fungal infection poses issues similar to disease epidemics in human history such as the plague. Unlike the plague, this issue is caused by fungus so whatever methods that are going to be used to control the spread of the pathogenic fungus will have to be adjusted for being a fungus and that the target is non-human.

I found the topic very interesting but I would have liked the article to delve more into the details such as how long this epidemic has been occurring, what is being done with healthy populations and more information about the infected populations.

Are studies being done on why this specific type of salamander is being affected by this fungus specifically?

Summary: Frogs are known to protect themselves from bacteria using peptide secretions.  Researchers at  Emory Vaccine Center and the Rajiv Gandhi Center have found that a  component of the skin mucus secreted by South Indian frogs  have the ability to kill the H1 strain of influenza viruses by disrupting the integrity of the H1 virus and binding to the  stalk of hemagglutinin.

Connection: Discovering a new way of controlling a flu virus relates to controlling pathogenic bacteria. New methods of controlling the H1 influenza strain allows for alternatives treatments of H1 just in case other methods become unusable in the case of resistance.

Analysis: I found the idea of utilizing methods found in nature for controlling viruses very exciting. Assuming that the specific peptides can be isolated, we can use this in medicine by either harvesting the secretions or recreating the peptide in lab. The research seems promising. Mice studies show that treatment with this peptide, named “urumin” by the scientists, can successfully treat influenza but further studies and tests are need to stabilize the antiviral peptide as well as insuring it is safe and functional for humans. The study presented by the article is very interesting and easily read by non-scientific readers.

Summary: Originally determined to be ravaging avocado trees in South Florida by transmitting the laurel wilt pathogen, the red ambrosia beetle are determined to be rare in avocado groves, in addition to determining that 6 other species of beetle can transfer this pathogen. Researchers at the  University of Florida Institute of Food and Agricultural Sciences are now  seeking better strategies for controlling the transfer of of the disease causing fungal spores carried among these beetles.

Connection to Class: This article is essentially looking at the idea of microbial management to prevent the spread of disease. Our class lectures mainly look at how humans  can control disease using proper hygiene and other antimicrobial techniques(i.e. sterilization, antimicrobial agents, etc.). Scientists in this scenario are seeking ways at preventing the spread of disease causing fungal spores that ravage avocado groves.

Analysis: What I found most interesting about the article is the number of potential culprits causing the spread of the laurel wilt pathogen. Overall, I think this article is accurate and is meant to let the readers know that these researchers have changed the scope of their study and may potentially have better results in the future. Structurally, the article seemed straightforward and concise. It is easy read and isn’t dense full of scientific terminology that can  confuse casual readers.

Question(s): Have they looked at potential carriers that aren’t beetles such as other insects or wildlife? Additionally, is there options for eradicating the spores from the beetles or treating these avocado trees once they are infected by laurel wilt? 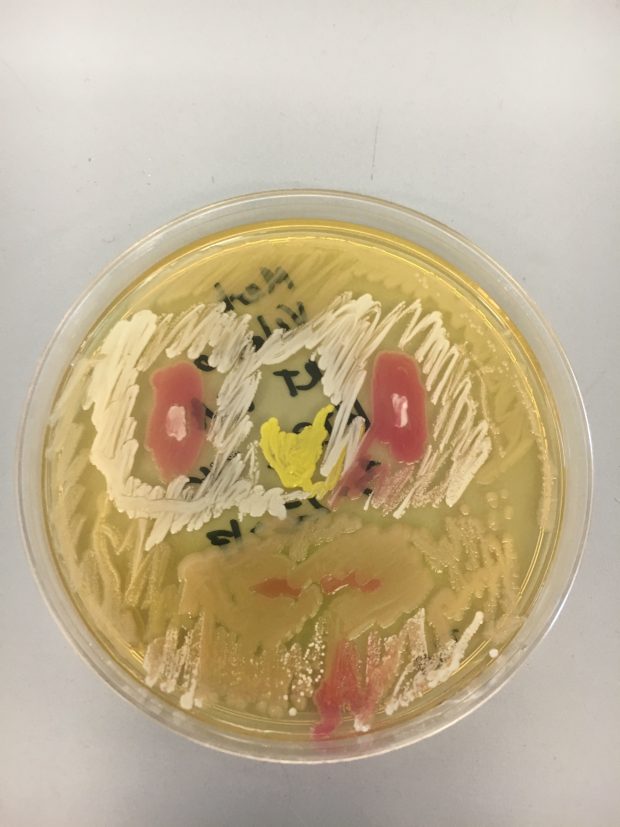 Here’s my art plate on TSA. I attempted to recreate a pokemon from the newest series of games, a small orb shaped owl named Rowlet. The main colors i needed were white, brown and a yellow/orange, green and black. Most of these were readily available except black, so red was substituted instead. It could have been neater but I’m pretty satisfied with how it turned out. My main issue with my final product was that i marked the plates in the center because i didn’t think it would show through the plate.

Hey guys! My name is Mark Velasco and I am a junior majoring in Biological Sciences and minoring in Music Performance in the area of percussion. Currently, i perform with the UAF Wind Symphony and with the percussion group Ensemble 64.8. In total i’ve probably been playing for about 9 years. Back to the class, i am very excited to see what we will learn in  Microbiology.