All that glitters may not be gold–it could be microbes!

I recently started teaching myself hand embroidery, and I thought it would be fun to use it as the medium for my final project. I was very indecisive throughout the process so I ended up making a few random things (some that are shown below). The final piece of work I created was inspired by the bacterial isolate project, specifically my own isolate. The first plate I swabbed with my environmental sample had a mixture of yellow, white, and orange bacteria. I ended up isolating a bacterium that grows in pale yellow colonies, Pseudomonas denitrificans. I didn’t have pale yellow thread, but I did have gold so I figured that was close enough. The first zig-zag streaked plate is based off my original sample culture, the second is based off my first quadrant streak, and the third is based off my final (4th) quadrant streak.

*Although my isolate technically didn’t have anything to do with gold, there is however, a type of bacteria that can detoxify gold into pure gold nanoparticles (Delftia acidovarans and Cupriavidis metallidurans, and possibly others). The process of detoxifying dissolved gold ions is a defense mechanism for these bacteria. 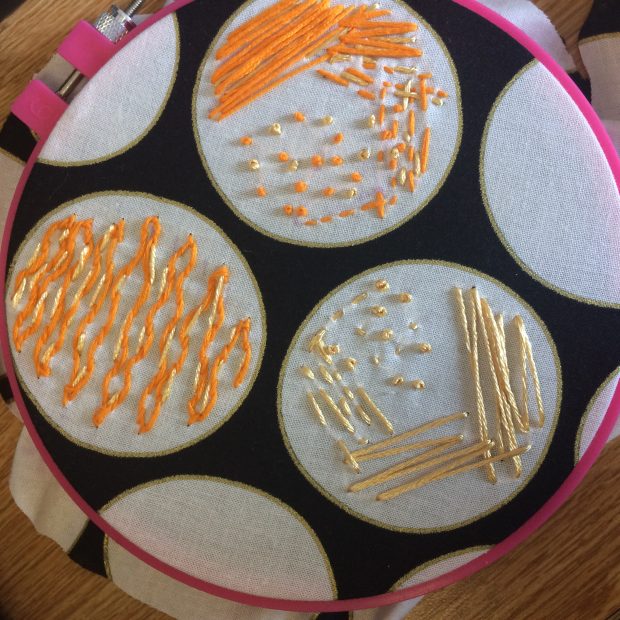 Other items I attempted to recreate include a T-4 bacteriophage, rRNA tree of life, E. coli bacterium, plasmids and horizontal gene transfer, a few are pictured below. 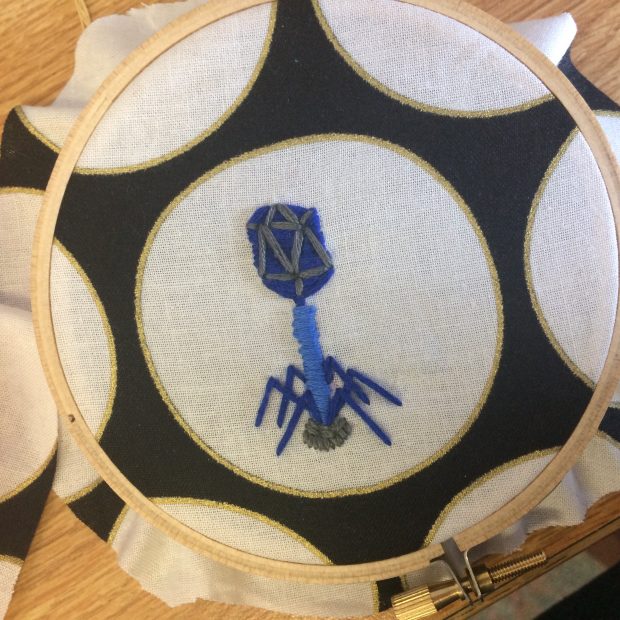 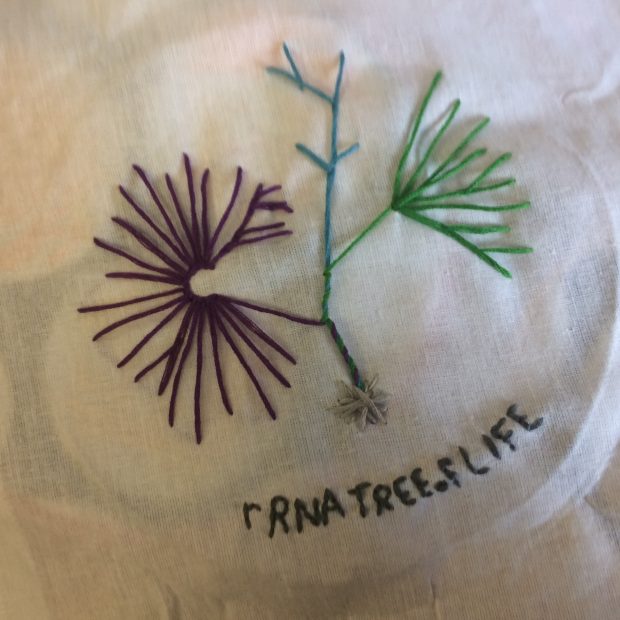 I realized in class today that I had of course forgotten to actually finish uploading my stuff to website….

Is Yellow Fever Knocking At Our Door?

Over the past three decades scientists have noticed three major diseases following the same pattern of spreading: they spread slowly through less populated areas until one day one person in an urban city gets the disease and then it spreads like wildfire. Zika, dengue, and chikungunya are all viruses that emerged and spread rapidly in Latin America and the Caribbean, and they have all had several small outbreaks in the US. Scientists are now worried that a fourth virus is following that pattern: yellow fever. Moving quickly from clusters to full on outbreaks in Brazil, yellow fever has killed more than 200 people since the outbreaks started in December, and due to the lag between labs receiving samples and then confirming the cause of death, there have most likely been many more. Scientists are worried that the disease will soon spread from the rural, forested area its currently overtaking. The disease is transmitted through a species of mosquitoes that only lives in the forest, however, there is a danger that mosquitoes that thrive in cities could pick the disease up from infected people. This relates again to what we’ve recently been discussing in class (I actually chose two of my articles based on the fact that I’m really intrigued by modeling the spread of disease). Learning as much as possible about the “behavior” of this virus is so important to the development of preventative measures. Scientists are aware of a general pattern that yellow fever may end up following, and are preparing for what may come of if that happens. I think that this article was written in such a way that the information is very accessible  to the general public. Not only was the current issue put into context by citing other similar outbreaks such as Zika, but the writing was not geared towards only the scientific community. Reading articles like this one brings up the question of why are mosquitoes such prime vectors of disease instead of other insects that also bite?

A Taste For Pork Helped A Deadly Virus Jump To Humans

In 1999, in a small town in Malaysia, a scientist named Dr. Kaw  Bing Chua made a discovery crucial for the restructuring of the agriculture and farming industry across Malaysia (as well as Singapore, the Philippines, and several other countries). Chua discovered the virus later to known by the name of Nipah. Chua, a grad student studying virology at the time pinpointed this virus as one spreading across the country, yet no one at the time believed it.  Over the course of the next year a disease more deadly than Ebola was spreading rapidly throughout the town of Nipah, Malaysia. It eventually caught the attention of the government, and since most common viruses were spread through mosquitoes, the government treated it that way. However, after months of efforts to decrease the rate of spreading, nothing was working. This is when Chua comes back into the story. Chua was adamant that the virus in question was not in fact spread through mosquitoes, but actually through pigs. He came to this conclusion when he observed that the only demographic of people not getting the disease were Muslim, and hence were not eating pigs. Chua connected with a lab in Fort Collins, Colorado where he was able to see the virus through a special camera at their lab. The virus was identified and confirmed to be one that spreads through livestock. This led to the researchers at the CO facility contacting the Malaysian government,  who then immediately switched procedures and began focusing on stopping the spread between pigs and pigs to people.

This relates strongly to what we’ve been discussing most recently in class.  Learning how a disease spreads is critical for studying how to stop or slow it. Once the Malaysian government realized that Chua’s observations were correct, they changed policies throughout their nation. The entire farming industry was turned over and reshaped in order to minimize the spread of infectious diseases, such as the deadly Nipah virus. It really struck me in this article that the key to reducing outbreaks is to start by preventing them in the first place. The article elaborates on how serious a threat diseases like measles pose for humans. Nipah, like measles, is a respiratory virus. It spreads through close proximity, like when the pigs lived in extremely close quarters, but it also can spread just through the air. This is why taking advantage of any available immunizations is key to reducing outbreaks of potentially deadly pathogens. One question that stuck with me after reading this article was how specifically is this virus adapting to its conditions? The first outbreaks of Nipah were only due to pig to human transfers, but as of late, the virus spreads from human to human.

The World Health Organization (WHO) recently published a list of pathogens  that are resistant to multiple antibiotics. This list was released in the hopes that it would encourage new research on antibiotics. WHO divided the list into three sections of varying severity: critical, high priority, and medium. The list includes bacteria, fungi, and viruses distributed throughout those categories. A few of the most prominent microbes listed are E. coli, gonorrhea, and salmonella. This article connects to many of the topics we’ve been learning about this semester though it mainly focuses on antibiotic resistance and spread of disease. The main reason for publishing this list was to increase research in the field of antibiotics, because these pathogens are quickly adapting and developing resistance to commonly used antibiotics. The article also discusses that some of the microbes are not only listed for their high drug resistance, but their ability to spread incredibly quickly. I thought it was interesting that it has taken this long to publish a list, and I also found it interesting that it wasn’t more publicized in the general public. While reading this it made me think and wonder just how fast will more infectious microbes be added to this list? And also how well is scientific research going to catch up to speed?

Hi everyone! My name is Taylor Seitz and I’m currently a sophomore working towards degrees in biology and chemistry (maybe a minor in math?). I’ve lived in Alaska for most of my life, but I hope to spend my time  elsewhere after undergrad. I’m super excited to take this class since I think microbiology is so applicable to the world around us. 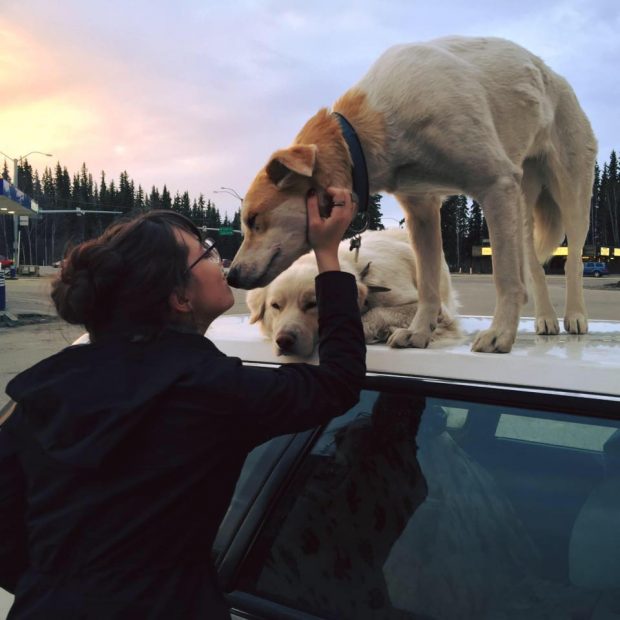